Here’s how it happened according the the Wellington Journal.

The event which had awakened interest among the greatest nations of the world, and which Thursday caused all England to pulsate with increased animation, was not likely to be overlooked in so loyal a Borough as Shrewsbury, associated as it is with so many monarchical traditions. Consequently Shrewsbury people honoured the occasion in a befitting way, and made another record of their strong attachment to the Royal House. Brightly broke the marriage morning. Nature donned her bridal garb, and the whole district throughout the day was a scene of gilded glory. The town itself had been made additionally attractive by the decorative display, which in some instances had reached the height of artistic taste. To attempt an enumeration of those who lent lustre to the embellishment would result invidious distinction, and therefore all must participate one general word of praise.  It may be pointed out, however, that in the evening, when the illuminative effect could best discerned, the Square was the centre of attraction. The Shirehall, the Mayors Court, and other public and business buildings were emblazoned with mottoes and devices, and the emblems of the Royal House were displayed in gems of fire. 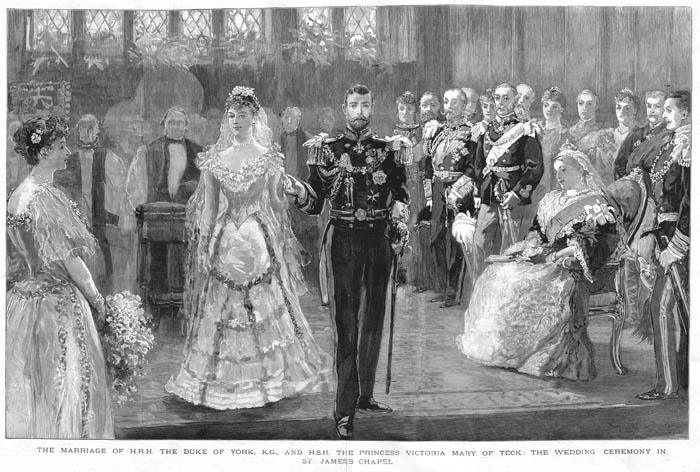 From early morning the bells of the church rang out merrily. People caught the spirit of festivity, and a general holiday was observed, this response to the Mayor’s suggestion being unanimous and complete.

There were various ways in which it was determined to mark the auspicious event. One of these was the presentation of a gift to the Royal couple. Messrs, Robinson & Wells, jewellers, High Street, suggested an article as a gift that met with general approval. This was a biscuit box, of highly chaste and not too ornate design, in frosted silver, with gold ornamentations. It is sexagon in shape, surmounted with the Royal monogram and coronet in gold. On one the six faces are the borough arms—a small shield in blue enamel charged with the “three loggerheads” in gold, and the motto “Floreat Salopia.” Inscribed in gold upon a narrow band of silver round the box nearer its base are these lines from the Ingoldsby Legends:”- “ She has given him a roll and a bun and a Shrewsbury cake of Palin’s own make.”  The box rests upon four beautifully-modelled golden figures of Sabrina.

As work of the goldsmith’s art the whole reflects the greatest credit upon Messrs. Robinson and Wells, and also upon Shrewsbury. Inside is inscribed—“From loyal inhabitants of Shrewsbury, 1893.” And underneath this is— “GEO. EVANS, MAYOR; H. C. Clarke, Town Clerk.”  The whole is enclosed in a leather case—Royal red—surmounted by the Royal monogram, and lined with pure white velvet and satin. Of course such a box to be complete must be suitably – fitted and with what could it be more suitably fitted than with the famed Shrewsbury cakes? These accordingly were supplied Mr, Crump (Wyle Cop), Mr. Plimmer (Castle Gates), and Mr. T. P. Deakin (Wyle Cop).— On Tuesday his Worship the Mayor, accompanied by the Town Clerk, proceeded with the gift to London and, the same afternoon, duly presented it in the appointed quarters at Buckingham Palace. His worship returned to Shrewsbury on the following day. The other portion of the celebration consisted of processions, music, tea for the children, free fetes in the Quarry, games, amusements, and fireworks. A vast number of people visited the town during the day, and must have found every means of enjoyment. The fete in the Quarry was of that kind to which it has become accustomed, and needs no special comment, but it may observed that Mr. Dove’s admirable taste and judgment enabled him to sustain the Quarry’s reputation as a place of undiminished beauty and undecaying floral charm. 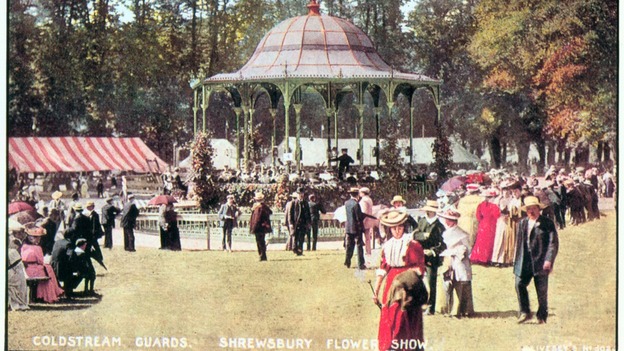 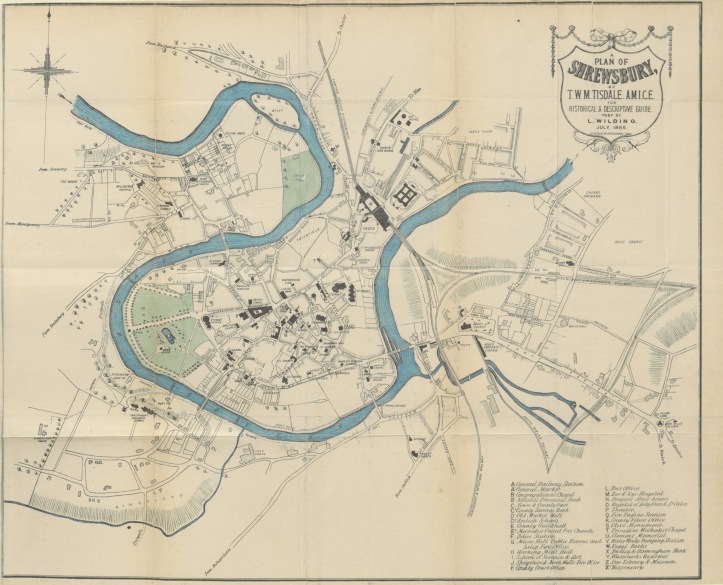 At two o’clock the procession was formed:

In this order the procession left the Square and proceeded, via High Street, Dogpole, St. Mary’s Street, Pride Hill, Shoplatch, St. John’s Hill, St. Chad’s Terrace, to the Quarry, accompanied by crowds of onlookers. On arriving near the band stand the Volunteers were drawn up the lower part of the ground, where they joined a number of men from the Depot, under the command of Colonel Carey.

The Artillery Band played the National Anthem, and then, at a given signal, one of the guns of the Artillery, placed on the Kingsland heights, fired a Royal salute, which was followed by repeated cheers for the Duke and Duchess York.

The Mayor then briefly thanked all present for their attendance, which had conduced so much to the success of the rejoicings. Their thanks were due to the various committees for the excellent arrangements they had made for the young people, who would, no doubt, long remember that day; and the military of all branches for their kind assistance. (Cheers.)—Hearty cheers having been given for the Mayor and Mayoress, the company dispersed to participate in the attractions of a free public fete. The preliminary arrangements were carried out by general committee, consisting of subscribers to the fund, but the detailed work devolved upon the following sub-committee: -Athletics: 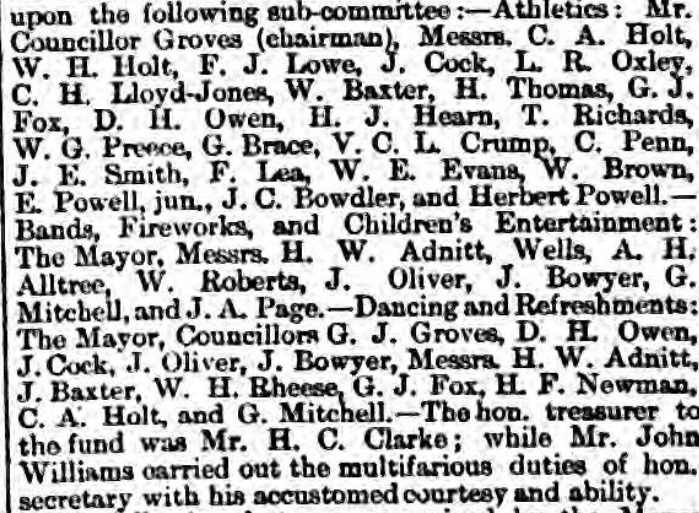 The following letter was received by the Mayor from the member for the borough :-  “Dear Mr.  Mayor,—l regret exceedingly that Parliamentary duties will prevent me being in Shrewsbury to-morrow. My attendance urgently required in the House of Commons, as what is called the ‘guillotine’ process is applied to the discussion on the Home Rule Bill, and frequent divisions are expected. I am sure constituents will prefer that the vote of Shrewsbury should be recorded on such an occasion, and I therefore do not propose to pair.—Yours very truly, H.D. GREENE.”

The Amusements consisted of a Royal Punch and Judy show: acrobatic and comic triple bar performances; musical eccentricities, &c.. Those were under the management Mr. E. R. Hoilier.

TREAT TO THE SCHOOL CHILDREN.

All children in the borough were provided with a free tea at the various schools in the town, and a medal in commemoration of the happy event was presented to each child. The schools in which tea was served and the number children regaled are appended: 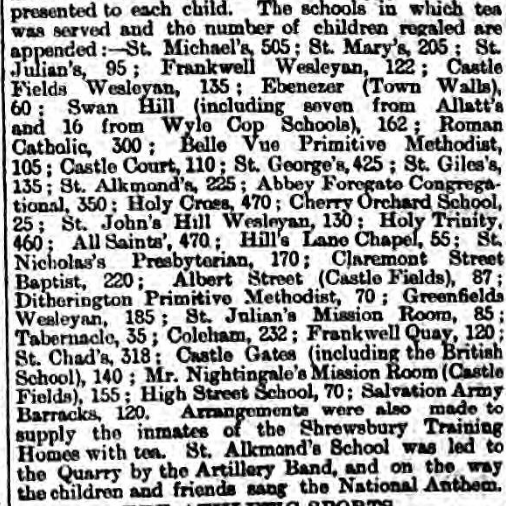 Arrangements were also made to supply the inmates of the Shrewsbury Training Homes with tea.

St. Alkmond’s School was led to the Quarry by the Artillery Band, and on the way the children and friends sang the National Anthem.

As usual, these attracted a vast number of spectators, and created much enthusiasm.

The following were the results.. 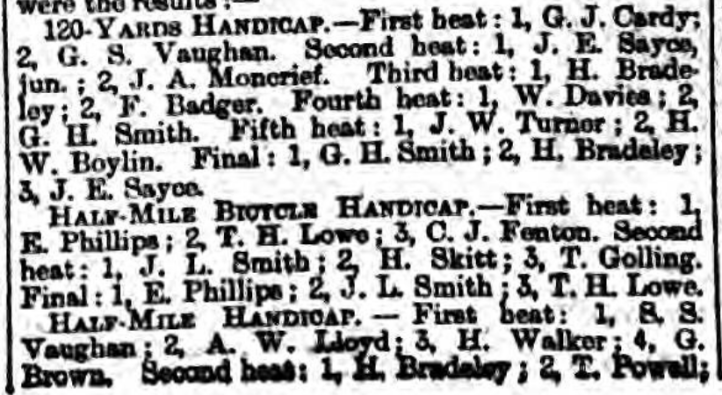 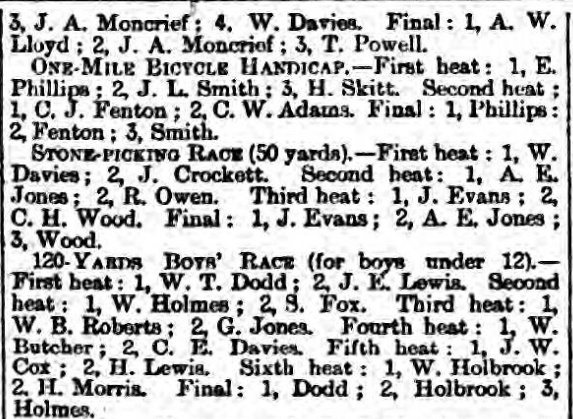 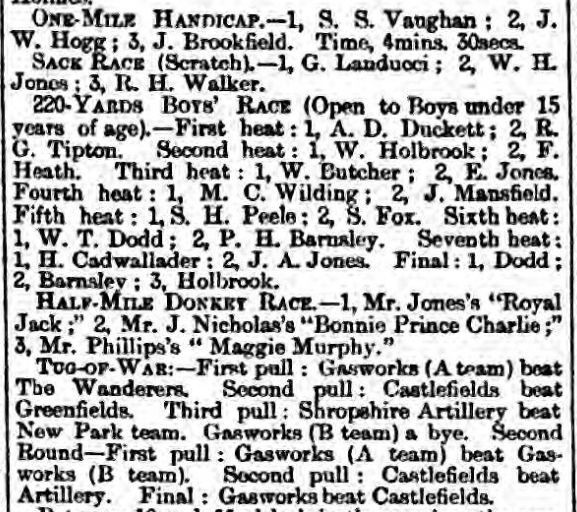 Between 10 and 11 o’clock the evening, the combined bands of the Shropshire Yeomanry and Shropshire Artillery played two marches on Pride Hill, near the Poet Office, and concluded with the National Anthem. After the inspection the Volunteers, the postmen and telegraph messengers were inspected in the Quarry by Colonel Carey (commanding the 53rd Regimental District) and Admiral Jenkins, and Mr. Adams (the postmaster) was highly complimented their neat appearance.

The fete finished with a grand display of fireworks by Messrs. W. and J. Wilder, Birmingham, the concluding device being a portrait of the Royal pair. 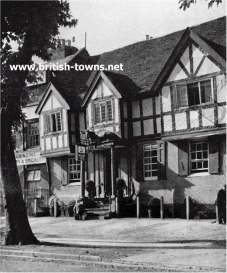 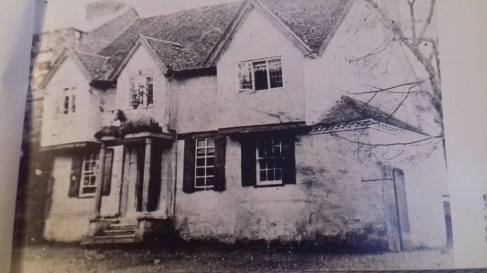